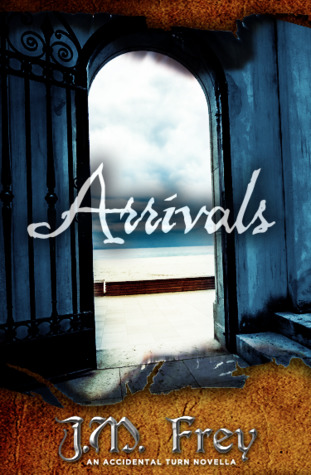 The quest is over. The Reader has been returned to her home, the villain is defeated, and the hero has found his One True Love. And now the hero rides off in to the sunset with his sidekick, who is also his true love…wait…is that right? Is this the way it’s supposed to go?

This is not the way things are Supposed To Go.

This is the novella that was published in the spring of 2017 (I’m still behind on my reviews, if you can’t tell), and it takes place immediately following The Untold Tale. Like Ghosts, this story is told from Bevel Dom’s point of view, and about how his life is turned completely upside down. For years, he and Kintyre have saved the day, and then ridden off together towards their next adventure, possibly after sharing whatever damsel they have rescued. They sleep together, but only with a woman in between them. They return to Turn Hall, but only for a visit. They are partners for life, but the aren’t life partners. And maybe neither of them is really happy, but it’s The Way Things Are. And as a storyteller, Bevel always knows the way the story is supposed to go.

But now things really have changed. Forsyth is gone, with his Reader lover Pip, and someone needs to go back to Turn Hall and run things. To take care of the tenants, and the free schools Forsyth established, and be the local Lordling. And of course, to tell everyone back home that Forsyth will not be returning (maybe they’ll leave out the bits about how he’s left for another realm with a legendary creature though, that just gets complicated). There is no longer a Shadow Hand of the king, to run the kingdom’s intelligence service. And thanks to Lucy Piper, Kintyre and Bevel have finally declared themselves to each other–it’s not just sex, it’s love. It’s commitment. It’s hard and scary and confusing and what on earth does it all mean? I mean, they’re together, but they’re not married, and Kintyre needs an heir, and how will their relationship be different, and how should it be different, and should it be different, it’s been working for years, was it really working, but they’re not happy, are they happy, Kintyre just takes Bevel for granted, but now he’s doing things for Bevel and he’s doing them WRONG!

This is a story about how Happily Ever After is actually pretty complicated, and requires a whole lot of work to make sure that you both really are happy.

As soon as I get close enough, Andvari grabs my hand and pumps it energetically, her grin sharkish behind her fire-red beard. Her hair is down for the night, the braids of rulership now loose, waist-length waves which swing around when she turns to punch Kintyre in the kidneys.

“About time, you clueless granite-skull!” she bawls joyfully.

Kintyre doubles over, not expecting the blow, and Sviur rises from where he and their son Virfur – by the Writer, how he’s grown! – was practice-strumming his father’s lute. Sviur’s lost none of the grace his dancing days instilled in him, and he offers both of us a polite greeting. We shake hands, clasping at the elbows to check for concealed daggers in the Dwarvish way. Sviur’s golden fall of hair is loose too, as it must be because of his common birth, but now it’s threaded with white. The braid at his chin is almost entirely colorless. Much moreso than I was expecting.  Virfur comes to stand beside Sviur, shy in the way young children are. He’s probably just on the brink of ten years old, but that is still young for a Dwarf – closer to our two or three. When we saw him last, though, he was still a babe in arms.

Some small secret part of me pangs with hurt. I was hoping to hold the baby again. How silly of me to have forgotten that the world below the Cinch wouldn’t just freeze like winter ice and wait for us to come back. Ridiculous.

“Sit, sit,” Nyrath admonishes. She bustles us onto cushions on the floor, which is what we prefer in order to be eye-level with the Dwarves when we’re in casual company. Sviur passes us both cut-crystal glasses of the clear root-vegetable liquor that dwarves specialize in. Kintyre downs his immediately, in one gulp. I shoot Sviur a look of apology, but the Dwarf shakes his head. He’s used to Kintyre’s manners by now, and just refills the glass without comment. Kintyre sips this second one, at least.

Virfur, curiosity overcoming his shyness, crawls immediately into Kintyre’s legs and stretches up to stroke his naked chin with wonder. Kintyre clamps down on his grimace and picks the toddler up from under the armpits and deposits him on my lap. I set aside my glass hastily, putting it up on a side table, out of the child’s reach. His parents laugh.

“Not one for children, Kintyre?” Andvari asks in that rumbling contralto of hers.

Nyrath narrows her eyes at Kintyre, but says nothing. Neither does my lover.

“It’s not that Kin dislikes children,” I say, and I’m reminded, sharply, that Pip had once called me Kintyre’s Walking Apology. At the time it hadn’t annoyed me, or registered as an insult, because that was part of my relationship with the man who had been my master, then my friend, and then my brother-in-arms. But now, sitting beside him on the floor of a Queen’s salon, holding the heir presumptive, and as Kin’s Paried elevated in rank and supposedly now equal to Kin, I’m still making excuses for his poor behavior. I am frustrated by the lazy, entitled assumption that I would smooth things over, that I will hold what Kintyre doesn’t want to, that I will fetch and carry and cook and bow my whims to his.

“Then why?” Nyrath asks, forcing me to continue the lame half-explanation, half-veiled request for forgiveness for the insult of passing off a prince like he was a sack of rotten meat.

“He just… doesn’t really know what to do with them until they’re old enough for him to roughhouse with,” I say lamely. “He likes my gaggle of nieces and nephews to be sure enough, but more so now that they’re all walking and talking on their own.”

The dwarves seem to take this at face value, and attention turns back to conversation. In my lap, Virfur wobbles his way upright. The boy doesn’t seem to mind whose lap he’s in, as long as he can explore this oddity of a smooth face. Kin and I indulged in a shave with hot water and proper lotions before we answered the Queen’s bidding, and it feels fantastic to finally be scruff-less, after so long on the road.  Must be odd to the boy, though.

Oh, that will be one of the advantages of our return to Turn Hall, to be sure. A daily shave, with proper tools. Sublime.

But Pip’s words are circling in my mind, distracting me from what’s being said, taking on a sharper and sharper tone with each repetition. Kintyre’s Walking Apology. Aren’t you sick of it, Bevel? Something querulous and cranky lodges in my guts, something shapeless but quickly solidifying, something unspoken but pushing against the hollow of my throat.

I’m the only one in my immediate family who is unmarried and childless. While Kin and I are officially Paired, we haven’t made is known that we are a Romantic Pair by pledging our Troth. It hadn’t seemed important before, when all I wanted was a visual acknowledgment that Kin was mine. Let others see our shared Colors and assume we were only pledged as Brothers In Arms, if they prefer. What does it matter to me if their assumption is wrong?

But now, with watching Andvari pull her pregnant wife in beside her on the wing-backed chaise, the pleased curl of their mouths and the striking picture of their very different skin tones mixing together as they clasp hands, seeing the way Sviur joins us on the cushions so he can lean back against his wives’ legs, the way they are all so content and unashamed and casually public in their displays of affection… I’m struck, suddenly and hard, with a kind of envy I never thought I would ever experience.

It’s not skin, or warmth, or sex. I have those. It’s not even affection, because Kin gives that freely, too. Gifts it like a Lord bestowing bags of grain to the pathetic, needy, starving peasants he has made pathetic, and needy, and starving by his own blind and selfish nobility.

No, it’s something else that I want.

Kintyre is too busy chatting, already sharing news of our latest quest – how we had fled Turn Hall in our individual rages, how we had separated and come back together, how we had confessed and hashed out our relationship, how we had scented Bootknife’s trail when we had stopped in Nevand to commission our Colors, how we had followed him down to the Valley of the Kings – to see the upset on my face.

I feel it growing out of my guts, infecting my expression, my posture, and I’m … I’m angry and I can’t… I can’t…

Virfur catches it, and babbles something sweetly soothing at me in the secret language of the Dwarves, one that I haven’t had the privilege to learn.

“And what about you, Sir Dom?” Sviur asks me, and I blink hard, trying to wrench my brain around to the question he asked.

“I asked you how you felt the morning of your Pairing. I had a stomach filled with bubbling sulfur the whole week before Andvari and I got married.” He flashes a brilliant smile at his first wife and she threads her free hand through his hair, affectionate. “What were you like before your wedding?”

Resentment boils up faster than I can contain it. “Yeah, well, we’re not really married, are we though?” I say, and then click my teeth shut hard enough that the whole room can hear it.

By the Writers’ left nutsack, is that what’s been brewing in the cauldron of my frustration?

“We’re Paired, though, Bev,” Kintyre says affably, like all the hurt in what I just spoke has passed him by completely. “And it’s not like two blokes can get married among the humanfolk anyway. Not married married.”

“And since when have we ever cared about what humanfolk normally do?” I say, and in my arms Virfur plops down on my knees, making me wince. He reaches for the lute and strums the strings, a discordant twang, and looks up at me with the expectation of praise and a grin that matches his father’s. Instead I hand the boy off to his mother. I cannot bare to have a child in my arms right now. A child that’s not… that’s not… but there never will be, never could be a child that’s…

Andvari gathers Virfur up, and he hides under her beard, both of them startled by the abrupt arrival of my foul mood.

I swallow hard, trying to pull this strange, roiling ball of emotion and confession back down into my chest. But I’ve repressed my discontent for so long it seems like now that the cork has been popped from that bottle, I can’t jam it back in.

“I… thank you for the invitation, and the drink,” I say, waving at my untouched glass. “But I’m tired.”

“Bevel—” Andvari and Kintyre say at the same time, but I’m already on my feet.

“Goodnight, your majesty, your highnesses,” I say with a curt bow, and then I retreat with my tail between my legs.

1 thought on “Today I read…Arrivals”