How to Throw a Coloring Party

Colouring books for adults are a trend right now, but an enjoyable one. It’s relaxing to just sit and colour (though you really need to get the good pencil crayons, mine are so cheap they don’t work very well). A lot of libraries are starting to run colouring parties for adults, with the idea that it’s creative, relaxing, and a good way to socialize while you’re asking someone to please pass the blue crayon. This link is more for throwing a personal party, but it can be easily adapted to a library. You can get easy colouring books with large, simple designs to colour, or books with more intricate patterns that require more attention to detail. Crayons, pencil crayons, markers, you can use any medium you choose. It’s simple, cheap, and fun–the perfect program!

Today I read burning from the inside by Christine Walde.

Anything is better than going home. Even working with the cops to get out of his latest graffiti charges. But then Thom finds out what they want him to do–go undercover and help them catch the G7, a group of socially conscious graffiti writers who have so far managed to elude the police. Not only will he be forced to narc on fellow artists, but for his day job he will be forced to buff–to remove graffiti, to cover it with grey paint until the walls are as dull as the people who live in between them. He can’t–but the only other option is to go to jail, or back home.

So Thom becomes TNT, the newest tagger in town. Creating art by night, by day he erases his own work. And then he meets her. Aura. Beautiful, talented, free-spirited Aura, so much like him. Aura, of the G7. She brings him into her world, and introduces him to the others: The DC. Kane. MC Lee. DJ O’d. Queen Mab. And their leader, Chef BS.

Together, Thom and Aura dream of finding the legendary Kalpa path on Tiger Mountain, the art left behind by Story, the greatest tagger the city has ever seen, who disappeared without a trace many years ago. But standing in their way is the police officer who secretly wants Thom to find more than just the G7–he wants Story, and he doesn’t care what happens to Thom as long as he gets her…

This is another of the books I got at the OLA Super Conference,and it was written by a classmate of mine from library school, Christine Walde. I knew she was a poet, but I didn’t know that she was also a prose author. At times the language she uses is so beautifully put together, you can tell where the poetry whispered in her ear saying don’t you miss me?

The point of view alternates between Aura and Thom, and in some ways they’re very alike. They’re both just so *frustrated*–Thom wants to make art, art that is seen and changes the world a little bit, and Aura wants to send a message to the world with the rest of the G7 that it needs to WAKE UP. Young frustrated idealism in the face of a cynical world that doesn’t want to listen–a timeless story. Thom and Aura would never work as older characters, because they would be more jaded–they need the impatience of youth to change the world.

The book also talks a lot about graffiti, what drives people to go out and do it even though it is illegal. Graffiti is a culture I have never experienced–probably because I have no artistic talent (alright, and I tend to be boringly law-abiding). I can’t even draw stick people well, and I admire people who do have that talent. There’s a sharp difference drawn here between those who scribble meaningless things with paint on public property and those who create art, who have a message and something to say in a public forum. The amateur and the professional graffiti writer, in a way. Both have their place, but buffing scribbles is a pinprick to Thom while buffing art is a wound. Christine gives a great interview here about graffiti and art.

burning from the inside reminds you what it was like to be young and need to express yourself so intently that you, well, burned with it–burn until you explode. Like TNT. 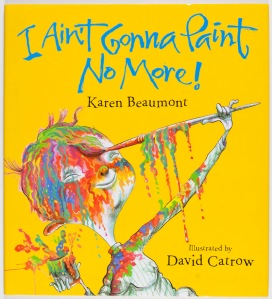 Today I read I Ain’t Gonna Paint No More! written by Karen Beaumont and illustrated by David Catrow.

Mama caught me paintin’ pictures on the floor and the ceiling and the walls and everywhere else, so she took my paints away and made me take a bath. ICK! She says I can’t paint no more. And I won’t after…

The grammar is atrocious, particularly when Mama hollers “YA AIN’T A-GONNA PAINT NO MORE!”, but kids will get a kick out of singing the repeated lines along. This book really needs the rhymes to be sung, especially the lines “I ain’t gonna paint no more, no more, I ain’t gonna paint no more.” The rhymes can also be used to teach children the different body parts that the little boy paints. This is emphasized by the words for the body parts being set aside from the rest of the lettering and being in a much larger font, as well as the accompanying illustration focusing on said body part.

The illustrations nicely compliment the story, especially how everything in the house is black and white except for the little boy’s paint. The painting is certainly creative, even if the adult reader may want to slip in a reminder not to paint on furniture, body parts, or anything else that adults would disapprove of getting painted. The reader can encourage the children in the audience to point at the body parts named and to go along with the action, such as making faces along with the little boy during the dreaded baths.

This book is suitable for reading to younger children, especially preschoolers. 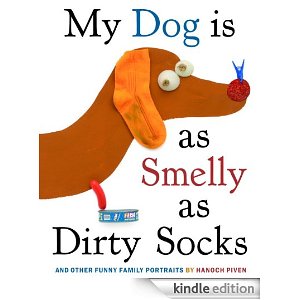 Today I read My Dog is as Smelly as Dirty Socks and Other Funny Family Portraits by Hanoch Piven.

My teacher asked me to draw my family, but it didn’t look like them, so I made it better. Now you can see my jumpy, fun, nutty daddy, and my soft, bright, yummy mommy, and  my strong, sneaky, piggy big brother, and my loud, Loud, LOUD baby brother, and my stinky, icky, smelly dog Schmutz, and best of all, you can see ME!

This is a great, very creative story that integrates narrative and visual art and encourages kids to connect physical objects to symbolism. For example, the narrator says her daddy is as playful as a spinning top, and that her mommy is as bright as the brightest light, and shows items like tops and lightbulbs beside the words, and then uses those objects to create the picture of the whole person.

It’s a very positive story about self-image, since the narrator describes herself last, using all kinds of words like sharp, majestic, colorful, lovely, strong, funny, curious, and with a big heart to love her special family. The book has some words in a larger font, usually the object names beside their picture, so an older reader can point to the words and to their accompanying picture for a beginning reader. The last two pages give examples of adjectives and items which can represent the word, such as using a ruler, numbers, or an owl to show ‘smart’, or a teddy bear, a cotton ball, or a slipper to show ‘soft’.

The Author’s Note says that he got the idea for the book from an art workshop with children and teenagers, where they created family portraits using everyday found objects. This could make a creative, interesting, cheap, and easy art project for all ages, to be done after reading the book.