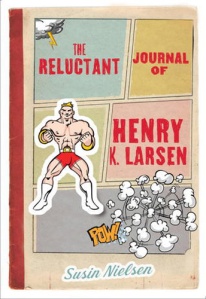 Today I read The Reluctant Journal of Henry K. Larsen by Susin Nielsen, which won the Canadian Council for the Arts Governor General’s Award, the Canadian Library Association Book of the Year for Children Award, and is currently nominated for a Forest of Reading Red Maple Award.

Cecil says I have to write in this thing. It’s supposed to help me ‘process’ what happened with Jesse. I think he’s nuts, but Dad says I have to do what he says. Not that Dad’s talking to anyone, he spends all of his time working and ordering pizza. Except when we’re watching Saturday Night Smash-Up, then it’s almost like before, except that Mom and Jesse aren’t here. Jesse never will be here again–not after IT.

I don’t want anyone at school to find out about IT. That’s why we had to move, and why I can’t talk to my best friend Jodie anymore, and why Mom is in Ontario while Dad and I are back here in British Columbia.

My new school’s not too bad. I made a new friend, Farley. He’s kind of a total nerd–he made me join this trivia team called Reach for the Top. I guess it’s fun, even though it’s for nerds, and there’s this girl, Alberta. She’s not a nerd, she’s actually kinda cool, but she’s really mean. But she and Farley would never talk to me again if they knew about IT. Heck, I wouldn’t talk to me again if I weren’t me and I knew about IT. I mean…what could I say?

This is a deeply moving novel about the aftermath of a tragedy, and what happens to the people left behind. (Spoilers!) Henry’s big brother Jesse was bullied for years, verbally and physically, in person and online, and he grew so depressed and angry that he eventually took his father’s gun to school and shot his biggest tormentor and then himself. The book starts about a year later, when Henry has just started at a new school and is desperate to keep what happened a secret. His father is depressed and his mother is on the other side of a country, having committed herself to an institution to deal with what her son did. Henry is angry at himself and at Jesse, since he witnessed the act of bullying that broke Jesse but didn’t tell because his brother begged him not to.

School shootings have been a hot-button topic for over a decade now, and bullying just seems to be getting worse and worse. Or maybe it’s just getting more media attention as a serious issue, instead of being dismissed as ‘life lessons’ and ‘kids being kids’. Laws keep being proposed to sop bullying and to punish the bullies, there are all kinds of anti-bullying days and awareness campaigns and zero tolerance policies and empathy training courses and school assemblies on getting along, but at least from the media perspective it’s not working. Kids keep killing themselves, and each other.

Henry is very articulate in his fervent effort to not talk about IT, as he dubs it, and what is most articulated is his confusion over what he feels, especially when he uses Robot Voice to try not to feel anything. He hates what Jesse did, he loves his big brother, he misses him, he’s ashamed that his brother killed someone, he’s angry at the neighbours and strangers and former friends who condemned their family for what Jesse did but he still feels guilty for being a member of Jesse’s family, he regrets that he didn’t tell someone how bad things were for Jesse even though Jesse begged him not to tell…Henry wants everything to be just like it was before but he knows that it never will be. It can’t. What he doesn’t know is how to get over it, to live his life and draw his family back together into a new formation. One with three people together and a dear  memory instead of three people separated and a big gaping hole where the fourth used to be. The thing about life it that it keeps on happening, even when you think it shouldn’t, when it hasn’t the right to be like before when it’s not.

The journal format works well for this novel–Henry tends to be a little obsessed with image, both due to being thirteen and because of his family’s image in their hometown after Jesse died. The journal format allows him to be more honest about his journey than he would be if he was talking to another person. This is a great book for anyone who wants a look at the invisible victims of bullying–the family and friends who have to deal with the fallout. Bullying doesn’t just affect the one being bullied–it affects everyone.

I really enjoyed this book–well, I say enjoyed. Maybe ‘was moved by’ is a better term. It was my prize from the Battle of the Books at the OLA Super Conference, and I’m glad I picked it. I’ll have to see if Susin Nielsen is attending the Festival of Trees in May, and if I can get her to sign it. Though for anyone else attending, I’ll see you there–I had a wonderful time last year and this year I’m on the committee. I’m really looking forwards to it, and to finding out who the winners are!