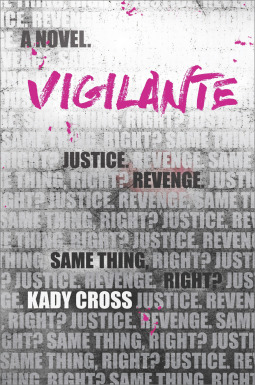 And me? I’m angry. I want justice. I want revenge.

I only meant to read a couple of chapters before bed. Instead, I finished the book and started my review immediately. I picked this ARC up at the OLASC17 conference this year. As I recall, the author was supposed to be there but I think she was ill. Any way, it seemed interesting, and to be honest I’ll take just about any ARC I’m given and I’ll give it a read.

Pink Pussy Hat marches against the fact that a rapist was elected as the President of the United States started the year, and it ends with #metoo and the house cleaning that so many companies are finally starting to do. This book is aimed at teens, and I’m older, but I’ve heard the things that Hadley, the main character, hears. I’ve felt her rage, and her sorrow, and her sense of helplessness. Cross does a fantastic job of articulating the experience of so many- too many-#yesallwomen. It’s just that Hadley gets the satisfaction of doing something about the rapists that hurt her friend. Yes, I suppose I should be all Responsible Adult and say something about how violence is never justified, but hell you probably know that. The ending is a little bit pat- I won’t spoil it, but it is more satisfying than realistic- but all in all this is a fast, compelling read, that women from around ages 14 and up (and sadly probably under) will be able to relate to. I won’t say it’s enjoyable- did you read the summary above?!? But I will say that this is the perfect book to have come out this year.