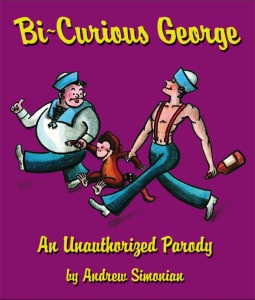 I bought this one at last year’s Word on the Street Festival because it looked hilarious, and it is. The jokes run the gamut from blatant innuendo to just plain blatant. It is very much a parody of gay culture, and uses many stereotypes, but it’s still very funny. There are mentions of drug and alcohol use, and the odd swear word, and of course sexual situations on just about every page. This is NOT a children’s book. 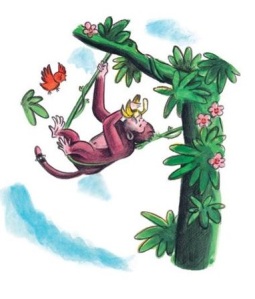 The illustrations are just as funny as the text. They’re done in the style of the Margaret and H.A. Rey books, but changed to be…more appropriate to the book, meaning not very appropriate. I don’t think he’s eating the banana… They are full of entertaining details, like the ship full of seamen being named the S.S. Cher, or the man dangling from a window in his underwear while another cross-looking man can be seen inside the apartment, or that every able-bodied seaman looking for George seems to need to bend over.

This is a fun, fast read. Though I will note, on my copy the front cover says that this book is an unauthorized parody, while the spine calls it An Authorized Parody. Mistake or just someone…curious?

He lived in the jungle.

He was a straight little monkey but always very…curious.

One day George saw a man.

He had on a sassy purple beret.

And George got excited, despite himself.

The man saw George too.

“I’m always in the mood for some hot monkey love,” he thought.

“I would like to take him home with me.”

This past Sunday was the 24th annual Word on the Street festival, and despite the dire predictions of rain all day long, it was a lovely sunny day (by the time I got there after having lunch with friends). I didn’t end up volunteering this year, since I’m currently working a full-time library job and a part-time retail job, and Sunday was my first day off since Labour Day (for the record, that was 19 days straight of work. Yes, I’m crazy).

It was a hugely busy day–I went by the HarperCollins table 3 times before I could get close enough to see the table, though I wouldn’t expect much else from a $3 and under table. The third Hobbit movie had an artist drawing you as a Hobbit, and the line for that one was very long–a friend of mine waited for close to three hours, and got cut off at the end, and then someone else butted into the line and got her drawing while my friend didn’t. 😦 The TPL library workers had a booth set up to get your picture taken with a cutout of the mayoral candidate of your choice, and information about where all three of the major candidates stand with regards to public library service. Polkaroo was back with the TVO Kids booth–I didn’t get a picture this time, but I swear I saw him!

Oh yeah, and I might have picked up just a few new books…Because when I have two shelves full of new books to read, a laptop full of ebooks, a whole new library where the kids all think I’ve already read every single book in it, and a very large backlog of reviews to write, I definitely need new books. Really, I do.

So, this should keep me occupied for awhile. At least, until the next book fair…